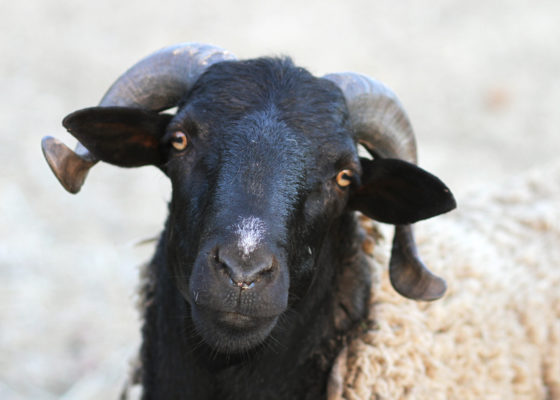 In late 2018 Hank  was discovered homeless and wandering in bushland. He was all alone with no other sheep in sight. He was brought home by the woman who found him, and she offered him a loving home. Unfortunately her fences were not adequate enough to keep this spirited ram from escaping, and it soon became clear that Hank would have to move somewhere more secure.

Originally his stay at Happy Hooves was to be temporary. Before rehoming he would first need to be vaccinated and then castrated. The plan being that after he had healed from his castration, he would be rehomed through our organisation NHRFA (New Homes for Rescued Farm Animals).

It was obvious that Hank had spent some time around humans, as he was not at all fearful of us. He would march straight up to us for his dose of affection and enjoy a good head scratch. As friendly as he is, if you turn your back to him, he doesn’t miss the opportunity to bunt!

The team ended up falling head of heals for Hank, and we couldn’t bare to let him go. He has since joined the Happy Hooves herd, and is enjoying life with an abundance of woolly friends.

Would you like to help us to take care of Hank?  One off donations and sponsorship gifts are available now to support our work.